My wife’s Optiplex desktop was getting long in the tooth, so I decided to upgrade. I ordered another Optiplex Small Form Factor machine, configured fairly simply: i7, 16 GB RAM, 500 GB SSD, 1 TB spinning rust disk, AMD graphics upgrade. It arrived last Friday. I set it up Saturday, and began to install applications and transfer data over from her old machine. On Sunday, I walked over to the computer and was greeted by a black screen with the message at the top, “No boot device found.” I powered the computer down and back up, and it worked fine. I thought maybe it was a power problem, so I plugged it into a UPS. Then I ran the diagnostics. All of the ones I could find. It passed everything.

I let the machine run for a day. No problems. I reran the diagnostics. Everything was copacetic. I waited another day, and did the same thing. Everything looked great. So, after one more day of perfect operation,  I swapped the new computer in for the old one, and hooked it up to a UPS. It worked fine.

Thursday morning, it was dead. Black screen. No messages at all. The fans were running, though, and the power light was lit. I did a hard power down, powered it back up, and it came up fine. I looked at the event log. There was an unplanned shutdown about an hour before I noticed that the computer was down. When I was scanning the logs, I noticed an unexpected shutdown Wednesday just before I moved the computer over to my wife’s desk. It must have recovered from that one by itself.

So that’s a total of three unexpected shutdowns in five days. I no longer think that this is a power problem.

In preparation for that, I moved the computer back to the staging area, and ran the stress test. The system passed. I ran the extended scan.  The computer passed that, too.

I clicked the “Support” button, downloaded the Dell System Detect program, and ran it. It correctly picked up my service tag. However, there was a problem. Dell thinks my computer, with a build date of 2/22/2017, is out of warranty:

That’s odd. I had signed up for the extra-cost support service, too.

I called the Dell support number. After a slightly confusing-to-me conversation — I had difficulty with the agent’s accent — I was transferred to an Optiplex support specialist who was a native US-English speaker. He suggested that I apply all available software and BIOS updates. I found 13 of them. When I’d done the same thing earlier, there had only been a few, and I performed those upgrades then. I downloaded all the new ones, and worked through all the installation programs, restarting the system after each of the ones that required a restart. I suppose I could just do one big restart at the end, but i always worry about the installation programs that require a reboot stepping on each other’s toes during the reboot, so I do things the hard way and reboot after each. The Dell support tech said that sometimes you cn see more upgrades after you’ve done some, because they have to be done in a certain order.

The BIOS was quite a bit older than the installed BIOS: 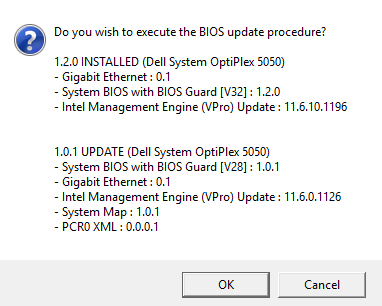 I left the newer BIOS in place. The Dell support tech has submitted a Dell-internal request to have the right version of the BIOS put on the download list.

All this took about an hour.

The computer is currently running. If it fails again, maybe Dell will swap it out for a new one. If it runs a week without a failure, I’ll call it fixed by the updated software. I doubt that will happen; this smells like a hardware problem to me. At this point, you start to think about some peripheral possibly being the source of the problem, but when the computer was in the staging area and when it was on my wife’s desk, it had different mice, keyboards, Ethernet ports, monitors, and UPS’s attached.

I took a look at the event log, and found the same four unplanned shutdowns that the Dell support app had flagged: 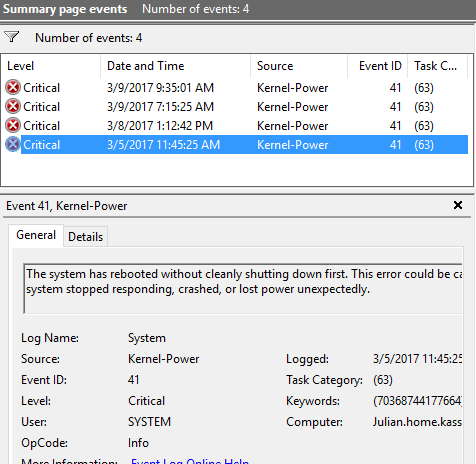 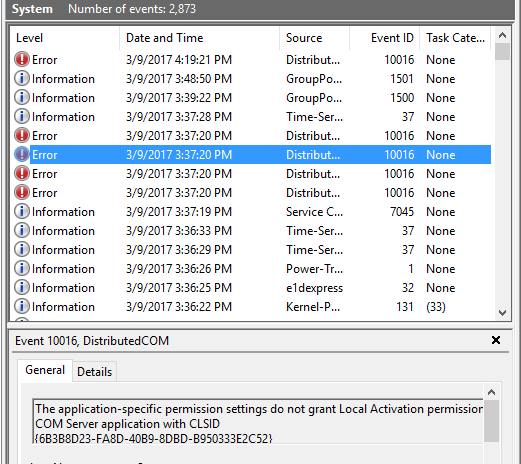 This turns out to be a Cortana permissions error which may or may not have a solution, and that solution is a bit risky. Since there appear to be no actual negative consequences, I’m not going to try to fix it.

The machine ran fine overnight. I did a set of diagnostics Friday morning, and it passed. Then, about 11:15 Friday, I noticed that the monitor was mostly black, with this ominous message at the top:

F1 did nothing. I powered down, waited 15 seconds, and power back up, The system came up fine. When I checked the logs, the system said the shutdown had occurred about half an hour earlier.

The tech I was working with earlier is off today. I set up a chat session with ProSupport Services. They had me run BIOS-level diagnostics, and the system passeed them They had me look at the BIOS log, and the only error message was that the BIOS couldn’t find a keyboard when I first powered the machine up. They also had me look for Wondows minidumps, and there weren’t any. Both the tech and I find it odd that I rever saw the Windows whine screen when I booted into Windows after a crash.

After about an hour, the tech decide to send me a new system, and capture this one on its return for analysis; they certainly don’t want to just part it out, because there’s a bad part in there somewhere. My money’s on the power supply.

Well, maybe it’s not the power supply. While I was awaiting the new compter, I let the old one run with the BIOS configuration screen active. It ran fine for four days.

On Wednesday, March 15, the replacement computer arrived. I pulled the computer itself, and left all the other stuff as it was shipped to send back to Dell with the old computer. I wired up the new box, filled out the Windows 10 set-up screens, and booted into Windows 10. Then I want to the Dell support app and told it to lok for and install updates. It found six, and installed five. It didn’t say which one failed.

I brought up the computer recovery media maker and created a bootable recovery USB memory stick. The system said it needed 16GB of space. It wasn’t long ago that 4GB was plenty.

I next ran both sets of diagnostics. The first one — stress — passed. The second, comprehensive one failed because I thought I was smarter than it was. During the diagnostics, the program tests the DVD eject mechanism by popping out the tray. Then, a few minute later, it complains that it can’t complete the test if there’s a DVD in the tray or the tray is open. I guess that that probably wouldn’t happen if the DVD drive were capable of closing itself, but the ones that Dell ships with the Optiplex 5050 can’t do that. So, after the tray poppped open, I closed it. That made it fail the test. Ah,well.

I ran the machine overnight and there were no failures. Now it’s time to set it up with the apps and settings that were on the old one. That is the topic of the next post.

After checking with Dell to make sure they didn’t need the OS intact, I wiped both disks on the first computer with Laplink SafeErase, snd sent it back to Dell, where it will be captured and tested. By the way, I liked SafeErase. I’d used free tools in the past, and, while they did the job, they didn’t have the refined user interface and optional capabilities of SafeErase.